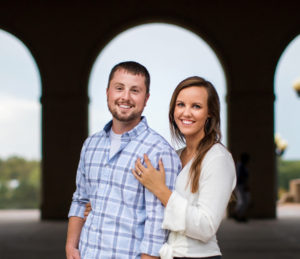 Zack and Courtney met through Courtney’s cousin, Alicia, and her husband, Jake, a friend of Zack’s. On April 28th, 2018, Zack decided to jump out of a plane, giving Courtney the scare of her life! Zack, however will tell you that wasn’t the most nerve wrecking part of the day. After the sky dive, the two went home to prepare for Avery’s birthday party they were hosting that evening. While, Courtney always goes overboard decorating and throwing in every detail to make Avery’s birthday as perfect as it could be, Zack jokes she was also throwing their own engagement party. Later in the evening as Avery started to open her gifts, Zack went inside to grab the bag that contained a special gift for Avery and Courtney’s ring. Zack paced the back row of the party as Avery finished opening up all of her gifts. When she was finished, Zack brought up the final two gifts of the day. The first was a necklace and jewelry box for Avery. The gift served as Zack’s promise to always love Avery as his own. Along with this gift was a card that told how much Courtney and Avery had changed Zack’s life for the better. Being the gentleman that he was, Zack made Courtney read the card aloud. As Courtney neared the end of the card, it became clear exactly what Zack’s intentions were. With the last line of the card, Zack asked Courtney to be his wife, and make him the happiest man in the world. Courtney responded in true Courtney fashion, tears coming from both eyes as she cried/yelled, “YES!”