Iceland: A Dream Trip to the Land of Ice and Fire

As a travel agent, I love helping my clients go places they’ve never been and experience things they’ve never imagined. It’s even better when I get a chance to hear stories about their adventures.

One place that’s increasingly popular with tourists is Iceland. I haven’t had a chance to visit…yet! But my client Suzanne shared her thoughts with me about her once-in-a-lifetime tour. It’s no wonder that Iceland is on so many people’s travel bucket list.

The details: In June 2018, Suzanne and her son, Ward, embarked on a 10-day fully escorted tour of Iceland. I booked them through Collette Explorations, a travel tour company specializing in adventurous destinations worldwide.

I can give you all kinds of information about Iceland, but let’s hear what Suzanne has to say: 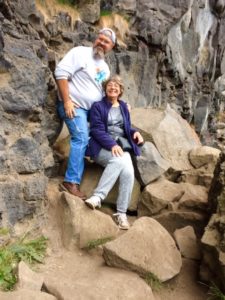 Iceland was AWESOME! My thoughts get all jumbled and spill over when I think about the beauty of the land and the people.

The volcanic landscape is a mixture of pointy “fresh” spots, and spots that have become more rounded due to time and winds. All of it covered in green moss and lichen that looks like pistachio pudding! Clouds swirl in and about, changing your concept of the landscape with each glance. All the people we met were gracious and smiling. The air is so clean. Even the water is delicious!

Reykjavik: Touring the City and Trying the Cuisine

After an overnight flight, we arrived in the city of Reykjavik. Our hotel overlooked the bay and the Harpa Concert Hall. The building is a work of art with panes of glass in different colors made to look like fish scales.

Our guide was absolutely amazing with all his information and facts. We toured the city, learning about Reykjavik’s interesting history, government, and the independent nature of Iceland’s people. One fun fact we learned was that the city hangs its Christmas lights the first of November and they aren’t taken down until April. This makes things lighter since the Icelandic winters are so dark.

There’s nothing like a long travel day and walking tour to work up an appetite, so it was time for dinner—Iceland style! I told myself that while I was there, I would, with a smile, give everything a shot. Everything was so different—and I tried it all! On an adventure like this, you have to embrace the culture, and that includes food. There’s no room for an “I’m scared” attitude.

(The Golden Circle is a 140-mile loop visiting several natural wonders of Iceland including waterfalls, geysers, and a national park.)

Considering that Iceland has such long, cold winters, we were happy to have a warm sunny day to see Gullfoss Waterfall (Golden Falls). The awesome sight and sound of this waterfall were magnified by the beautiful weather. Even though I saw it for myself, it is still hard to imagine the size and incredible roar.

The tour was filled with interesting educational moments. We visited a farm with Icelandic horses. They demonstrated their different gaits and were beautifully shown off by their handlers. We learned that horses can leave the island but none are allowed back. This is to keep out horse diseases. Lots of things in Iceland are very “pure” and mandated to stay that way.

Believe it or not, there are no mice, rats, or snakes in Iceland. The only predator to the sheep (which are everywhere) is the arctic fox. And imagine—no ticks or mosquitos! There were midge flies that swarmed in clouds but we didn’t have to endure hardly a smidge of midges!

At a greenhouse cultivation center on the property, we learned how geothermal energy grows tons of pesticide-free tomatoes and cucumbers. We were served a delicious, fresh tomato soup with an interesting assortment of bread.

Leaving Reykjavik, it was on to Akureyri and a three-night stay at a boutique hotel in the middle of nowhere! It was magical. Walking barefoot in the soft sweet grasses made for a relaxing stay. We enjoyed long twilight walks through the countryside and even met a few horses.

While there, we took a bus trip to a fascinating turf settlement at Staoarbraut. Our bus driver’s name was Thor—honest! He could trace his family back to the year 900!

The settlement was like a time capsule. Because timber wasn’t available in the area, the houses were built with volcanic rock walls and turf roofs. They looked like hobbit houses! We visited a nearby modern building for hot coffee and found a sweater to buy. We were told that a local woman knitting at a nearby table had made it. We got to meet her and of course, took a photo.

At the town of Husavik, we ventured into the sea for some whale watching! We crawled into a rubber inflated boat for the ride of our lives! Whales blew and flapped all around us. Only when we were back on dry land did we realize we were just rubber duckies in the whales’ ocean! Gulp!

Walking on a Glacier

Last but certainly not least we walked on the Snaefellsjokull Glacier. The trip up there was a TRIP too. We rumbled up the side of a steep volcano in an old NATO vehicle. Then, we transferred into a caterpillar-type thingy and crawled up even higher. Finally, we got out and saw the top of the glacier sparkling in the sun—for five minutes—until a swirl of wind took it into total mist—then back again, and so on. I’m at a loss for words to describe the beauty of the crystals in a handful of “snow” I picked up. And the volcanic rocks poking out—they were as warm as could be.

We sampled some tasty Icelandic food in a large tent set up for us. To keep us warm they handed us the best cocoa I’ve ever had. It was cold, but I didn’t get frozen. And more importantly—I walked on a glacier!!

Suzanne B. is a teacher who is well-versed in international travel. This was her second Collette tour. She has already booked her next one. This story is pieced together from emails sent from Suzanne to her friends about her time in Iceland. 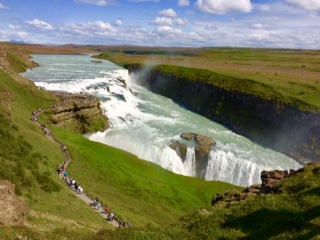 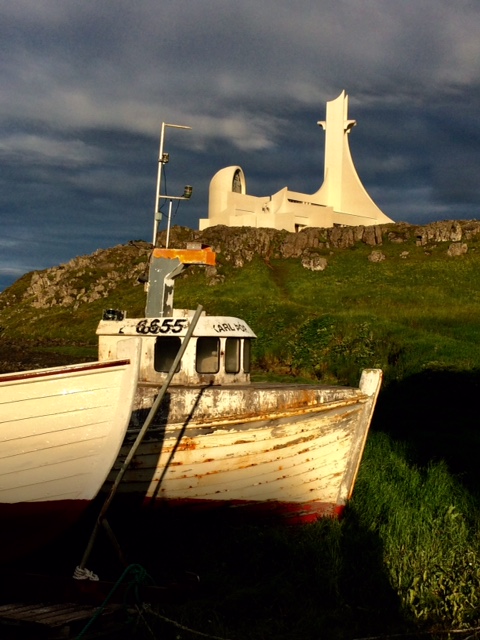